Shining a light on mental illness, yet...

May 18 Posted by Doris in Doris' Musings

We watched the movie "Silver Linings Playbook" tonight. I was thrilled with the needed attention it brought to mental health issues (primarily bi-polar & depression), yet was troubled by one recurring theme. By the time we meet the male protagonist, Pat, he's been in a mental hospital for eight months and we quickly come to understand via the repeated comments about lost weight, that he was heavier when he went in than when he came out.

The compliments on Pat's lost weight occurred nearly a half dozen times throughout the film. Each time they were received with a smile and/or thanks. I was warned to expect this aspect of the story, but still it bothered me. Even diminished, for me, the overall value of the film's message.

Maybe because we had just returned from giving a presentation in Utah where we instructed on the need to move away from "fat talk," and how comments on weight, lost or gained, is a huge part of this problematic behavior. And maybe because in shining a light on Pat's struggle with his specific mental illnesses, the movie appeared to minimize other seemingly "quirky" habits: wearing a "trash bag poncho" to increase the sweat factor involved with his excessive amounts (in my opinion) of exercise. It felt to me that his exercise/diet patterns were potentially ignored and unidentified co-occurring conditions (due to their cultural normalization as "acceptable" patterns of behavior rather than potential indicators of serious illness).

On our drive to the Salt Lake City airport Tom took a photo of an old-time ad on the side of a barn: 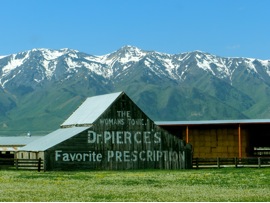 Curious as to what Dr. Pierce's "prescription" treated, I did some Internet searching and found this article. Evidently, this "favorite" woman's tonic was:

The best medicine for girls who are nervous, melancholy, and irregular of appetite. ... It cures nervousness, dizziness and melancholy, promotes the appetite, and gives the body robust health.

Wow! A cure for mental and physical ills--what a miraculous elixir! If only it were that simple. All mental illnesses are complex and serious issues that are not easily treated with a simple tonic. What "Silver Linings" attempts to do is admirable: educate about and humanize mental conditions that are often trivialized, misunderstood and harshly judged while eliminating the shame of suffering with biological/genetic illnesses that are not due to personal failure or choice.

I just wish that the weight loss and excessive exercise (as I perceived them to be portrayed) had been left out altogether or included in Pat's diagnosis as treatable, co-morbid conditions. Just my two cents :)